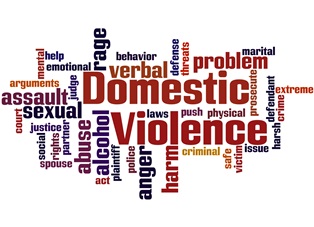 Every nine seconds, a woman is assaulted or beaten in the United States, according to the New Mexico Coalition Against Domestic Violence. The majority of these women are abused by someone in their own families. Most often, domestic violence involves an abusive spouse.

In addition to being physically painful, emotionally devastating, and illegal, domestic violence greatly impacts the terms of a divorce or child custody arrangement. If you are seeking a divorce from your abusive spouse, it is important that you understand your rights as a victim of domestic violence.

The Crimes Against Household Members Act makes domestic violence a crime in New Mexico. Despite the name of the law, it’s not necessary that family members live together for domestic violence to occur. Instead, the law provides that assault or battery against any of the following people is considered to be domestic violence:

More specifically, it's a crime to do any of the following to any of the people described above:

What to Do if You’re Hurt by Domestic Violence

In addition to being a crime, domestic violence is terrifying. You may fear for your own safety or the safety of your children, but there are legal actions that you can take to protect yourself and your kids.

How Domestic Violence May Affect a New Mexico Divorce

A domestic violence arrest or conviction can also impact the dissolution of your marriage and any child custody and visitation arrangements. Domestic violence can, for example:

However, domestic violence shouldn't impact an abusive individual's responsibility to pay child support. The duty to provide financial support for minor children continues even if the court orders sole custody to the other guardian and limited or no visitation with the parent who committed the violent acts.

How Genus Law Group Can Help

Accordingly, we encourage you to speak to a New Mexico domestic violence and family law attorney as soon as possible. The experienced and compassionate team at Genus Law Group will make sure your rights are protected. Call our experienced domestic violence lawyers today for a confidential case evaluation or click here.